Yea, I am writing this post to show how big my baby bunnies have gotten… Cause they are adorable!

I seriously can’t believe the color hodgepodge from a white rabbit with spots and a black rabbit. Two reds (which I am a sucker for), three blacks, two white spotted ones, and a grey one.

They are burrowing into their newly changed nestbox (don’t want them to get nest eye, which is a bacterial infection that can cause blindness). 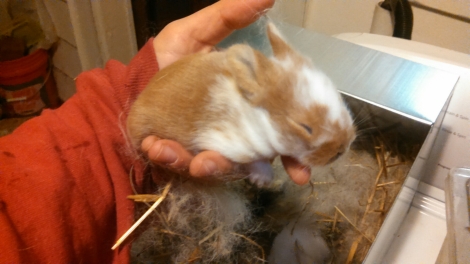 This is my favorite, by far. He is over a tenth of a pound bigger than the 0.31 lb average. And their eyes are opening!

Seven days ago, Sorceress had 8 babies, and five days ago, Syren had babies. Since three of Sorceress’s babies died, and all but one of Syren’s died, we have a mixed litter.

There are two reds, one grey, one white, and two blacks (one from Syren). They are around 0.2 lbs each. 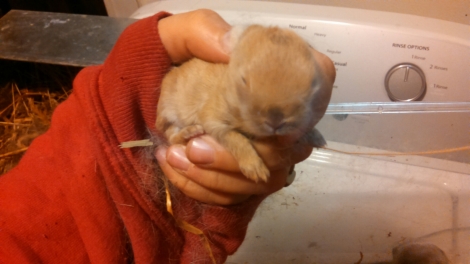 No eyes open yet. Should be open by the end of the weekend. That is all for today, as Creme the Guinea Pig hasn’t had babies yet! Though she looks like she is about to pop any day!