Well… The awesome pictures that I got from the installation of PRS nutrient probes (more on these later) and nutrient sampling with my interns Karyn and Bella went into the digital netherworld when I broke my phone, as did the pictures of pumpkin planting day. 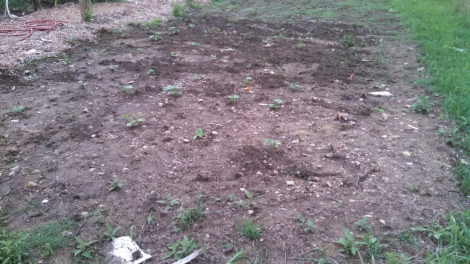 I added a handful of compost to loosen up the clay before planting 2 seeds per compost pile. This was on July 15, which is the last possible planting date for pumpkins before Halloween.

Anyways, germination in the top half of the project was fantastic. Toward the bottom, well, we had SO MUCH RAIN that the seeds were slow in coming up, and may have rotted. I will be transplanting the extra plants sometime this week, after moving tomorrow.

Sunday afternoon, my fantastic intern came out and helped me apply neem oil so the evil squash bugs don’t eat my pumpkins! While i was weeding. It also acts as a fungicide against some of the common downy mildews.

Closing day tomorrow, have a line in on some American Chinchilla Rabbits, and I have sexed Cassius’s pups (Snap, Crackle, Pop, and Tony the Tiger). Three boys and a girl.