For an unemployed individual, I really have been awful about posting things onto this blog. Who would have thought trying to set up a new home, applying for a new job in Girl Scout programming, brewing, trying to launch an art business, a new workout regimen, and competing in Dog Agility trials with Clark would be so exhausting!?! 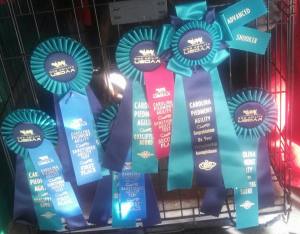 Three first place finishes, one second, and one fourth place finish. All accompanied by the title that lets us compete with the big dogs in Masters! Such a good dog!

A little less than a month ago, we got to take home our cat, Dax. Back in early November, we met Dax at a meet and greet at Petsmart with a local rescue, and fell in love with her nonchalant attitude with our cattle dog. She had a litter of kittens that were weaned and ready to go to their new homes too (even though she was less than a year old). So, we started to get an application together on her. Less than a week later, the president of this local rescue groups (where Dax was living) was busted by animal control because she had… wait for it…

Of course, after falling in love with this cat, I immediately started to panic when I hear that 65 or so were euthanized. So, I started calling around. The county shelter didn’t have her, the SPCA adoption center didn’t have her (where the animals were sent). So, I contacted the rescue, who said that she was one of the girls that were saved (*phew*), and she was at the SPCA shelter. 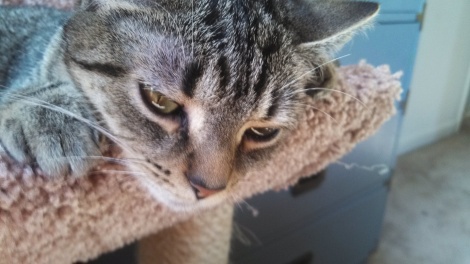 She was totally worth the two month wait

I immediately went to the SPCA shelter, and found out that she was being processed at the quarantine facility, and hadn’t been put into the system yet. I got her shelter number, and filled out an adoption form right then. However, because there was several different contagious feline viruses at the house, she would need to spent two months in quarantine! Then, she would need to be spayed before we could get her.

After a long 72 days of waiting, we could pick up our tiny 6.3 lb brown tabby, and introduce her to the two dog monsters. Her and Banjo hit it off right away, and Clark (who has lived with cats before), was guarding me very jealously for the first few weeks. But they are buddies now. 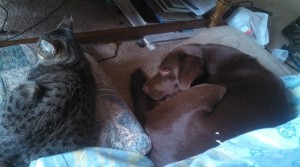 And I knew that they would love each other!

On another note, I think I am going to start with quail, as opposed to rabbits for the time being. They are easier to feed and grow, until spring, when I can grow supplemental rabbit food. I need to build a cage holder and get the cages repaired, both of which I am waiting on warmer temperatures for (and no, 40 degrees F is NOT that bad, but it has been raining).

One response to “Introducing Dax”