This week, they are running an iCamp session with 18 girls. Each girl gets an ipad to photograph and document everything. We were going to head out and document and georeference fungi, trees, soil macro-invertebrates, and rocks. However, it was raining (pouring), and I didn’t want to ruin council property.

So, I decided to test drive the bunnies (and chickens) with groups of people.  We took down several benches and laid them down flat. Then, we released the five rabbits into the areas. The girls interacted with the bunnies (not picking them up) taking photos and learning to use their cameras. 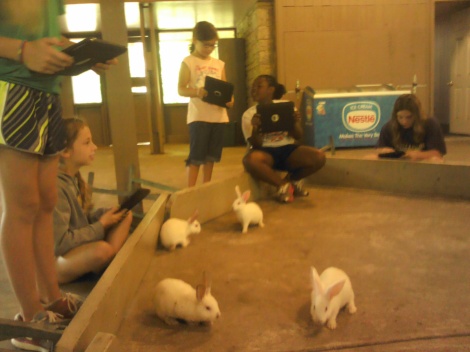 Bunnies in an enclosure being photographed and petted.

After the rain cleared up, I left the rabbit with Laces (one of the staff members), and we took the girls out on a 25-30 minute safari. All in all, the rabbits make for an excellent rainy day activity for us.

The CIT 2’s (juniors and seniors in high school) came by and visited. They will be helping me build the chicken tractor once the parts are built.

The young Brownies came in last, and after they changed, they pet the bunnies and chickens, and observed the button quails. Then, we told active stories.