Generally, I am one who totally disdains the wedding website idea, which is weird, because I love being the center of attention.  (Something about not wanting to give any sort of credibility to what we both consider to be a crazy inflated, extortionist industry). However, there are a ton of people coming in from out of town, and we want to make sure that they are prepared for what is coming. Not only that, but I have the propensity to lose things (socks, silverware, dishes, various important things, invitations, etc.), so I want my friends and family to be prepared to lose the invite too!

Anyways, Warren is in the middle of a massive bid for World Science Fiction Convention for 2017, and Mandy is working on her dissertation and trying to run a small farming business, so this page will probably remain under construction. If anything is missing, let us know.

Warren and Mandy were married on epic pi day (3/14/15). However, Mandy has a very large family who live over 18 hours from the original ceremony site. Since she did not wish to bankrupt this amazing family, she promised them a wedding and reception of their own. This celebration will be way more fun than the original, because of the location at the NEW ZOO adventure camp/ski lodge, and bonfire.

There will be no official photographer, if you want to take pictures for whatever reason (epic dress, etc), we ask that you not use flash indoors, and be courteous to those you are taking pictures of (i.e. no internet posting without permission).

Followed by a Sparkfarkle and Corn Roast

Take Hwy. 41-141 North from Green Bay to Exit #176 (County B/Suamico/Sunset Beach Road). Turn left (west) on County Trunk B and go about 4 miles then turn right on County Trunk IR. The Reforestation Camp is straight ahead on Reforestation Road/County IR. You park at the ski lodge parking at the top of the hill (a right before the fire tower) in the parking lot for the adventure camp.

The families will be arriving at around 12:30 at the ski lodge. We are purchasing a limited amount (50) of passes to the NEW Zoo Adventure Park for people and families that wish to challenge their fears. There will be ziplining, a high ropes course, and rock climbing elements. More information can be found at the Adventure Park website. There will be a light lunch available for those people from out of town that want to come early, please RSVP if you will be attending.

For those who are not old enough/daring enough/crazy enough to do the Adventure park, the ski lodge is just minutes from the North East Wisconsin Zoo. For a reasonable admission, you get access to several educational programs, loads of animals, and good fun. There are also hundreds of miles of walking trails available. We will also have games available in the ski lodge.

For Out of Towners

There is a block of hotel rooms reserved on Lineville, Rd.

We treasure your company, and understand that many people have come from a long way, and that means more than anything. Mandy really wants a grown up person job, but we figure that nobody can really help with that… That being said, the impolite thing that shall not be named… because people have been asking.

We (ok, it’s Mandy) also own and operate a duck and rabbit raising operation/homestead. The cost of food and hay keeps going up, and we are saving for the day that we can buy a farm of our very own, with outbuildings so we can pasture raise sheep, future bacon (pigs) and turkeys on top of the rabbits and ducks. We also want to be able to have flight pens to raise gamebirds to be sold to people who train hunting dogs and as gourmet food in restaurants.

Warren has grown up in Raleigh, but traveled broadly.  He studied philosophy and physics at NC State and now works at NC Farm Bureau Insurance.  Previously, he’s worked delivering pizzas, bouncing at a rock club, running astrophysics simulations, and making floral arrangements, but never let his work define his life.  Recently, he bought a house up in Creedmoor where he and Mandy live along with their three dogs and a cat (and a whole menagerie in the back yard).

The really interesting bits about Warren, though, have always been his hobbies.  He has long been a tabletop gamer, and still indulges in this some with Mandy (particularly the game Sentinels of the Multiverse).  Through this, he discovered science fiction conventions, and has helped to organize them since he was 16 years old. Currently, he is co-chairing a bid to bring the World Science Fiction Convention to Washington, DC in 2017 (dc17.org).  In recent years, he has taken up homebrewing beer, and is particularly fond of German styles.  And largely thanks to Mandy, he has gotten into herding with Banjo, his Australian Cattle Dog, who loves telling sheep what to do, and may one day be fortunate enough to be allowed to tell cattle what to do.

Warren has no intention of using this space to tell you about how he totaled a car without doing any panel damage, the time he saw an airborne car cut through a telephone pole, how he won a bareknuckle boxing match, the way he evaded German police in a train station, why he got drunk with Tory politicians in the Midlands, what it was like to jump off a bridge, how a rabbit peed in his face, or just what he did to get ambushed by four Greensboro police cars.  You’ll just have to ask him. 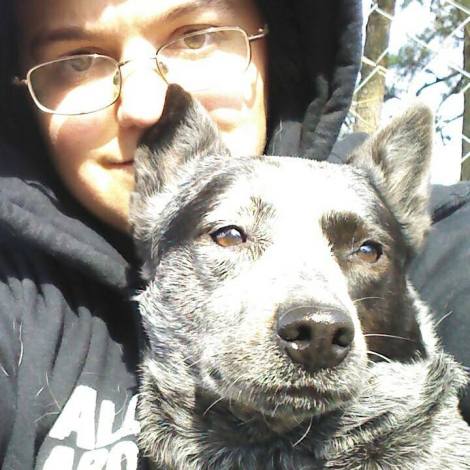 Warren used to be a cat person… but was recently corrupted by a certain brown, fuzzy wiggler, and now owns a dog too.  This is Mandy’s website, so she already has an About Me page. But, I realize that your time is limited and your clicks are better spent with cat memes and Netflix. In short, she is a proud Guinea Pig Rancher, artist, crafter, and prolific hobby acquirer.  She also has been in college for her entire adult life… Originally from Freedom, WI, she came to North Carolina after a lot of adventures to undertake a PhD program in Soil Science at North Carolina State University.

She grew up with a love of all things animal, but shunned the pre-vet life that most people in the family thought she was going to take in favor of a major in Agricultural Education, which rapidly changed to International Studies once it became a major at the University of Wisconsin – River Falls. Under the scheming tutelage of an amazing professor and adviser, she was able to do several study abroad experiences (traveling to some 33 countries, living in New Zealand, Belgium, and Scotland), undertaking sustainable agricultural and soils research pretty much anywhere she could.  She did an MS in Agronomy at Kansas State University, where she found an abandoned, wiggly, monster 6 month old puppy who had a penchant for eating textbooks. She desperately sought out the only training facility in town, and fell in love with agility, and has been training ever since. Then, she discovered sheep herding with Warren’s dog, and decided that she needed to have a Cattle Dog of her own… and along comes Pocosin! Agility and herding were our gateway drugs, and we are now competing in obedience and rally obedience as well.

3 responses to “The Wedding Page”