There have been a lot of questions recently about the costs of keeping rabbits vs. guinea pigs for meat production. Many of them are in my own head, as I determine which species are most cost effective, and which ones require less work. This is a really long post, but I though sharing the numbers would be beneficial for others deciding on what they have time and money for.

So, here, we are doing a head to head combat style analysis of my experiences raising both species so far.

Rabbits don’t have heat cycles, as they ovulate when they are put in with a buck to breed. Gestation lasts 30-32 days, and they have, on average 6-8 babies. These babies are born totally naked, helpless, with their eyes closed. Mothers die, babies need to be hand nursed. Because they are so underdeveloped, so many things can go wrong before they grow to respectable meat size (though, our cat doesn’t complain). It takes them 4-6 months to grow out, and in the larger sizes, replacement does can’t be bred until after six months, and bucks don’t mature until 7 months (which is why I haven’t had any babies after Spytfyre did). They take 4-6 months to butcher, at a weight of 3-5 lbs, with about a 50% dress out rate (meaning that 1.5-2.5 lbs are meat). 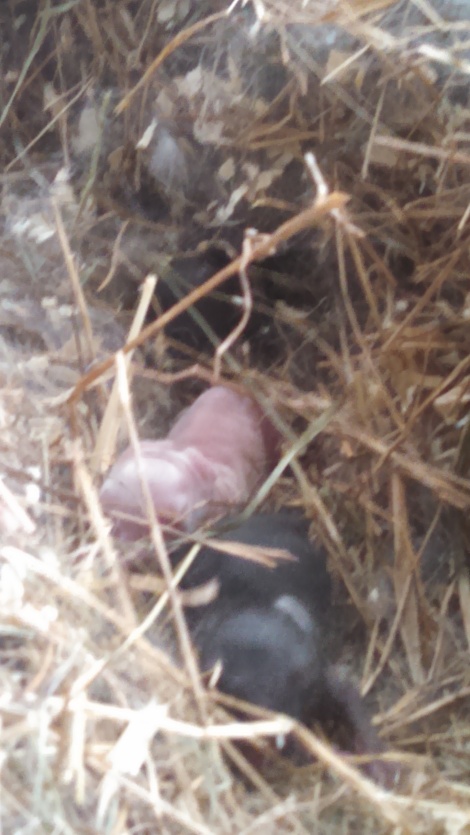 Guinea pigs go into heat once every 2-3 weeks (not like dogs, they don’t bleed), and gestate for over two months (68-72 days), which is crazy given their small sizes! They have between 3-5 babies each. These babies are born running around, with all of their hair, eyes open, and nursing. If the mother dies they can be weaned immediately, though they grow faster with mothers milk. Even though they gestate longer, they are about the size of a one month old rabbit, so, timewise, nothing is really lost.

Guinea pigs are able to reproduce as young as 3 weeks of age! It is totally crazy! Though, I tend to wait until females are 1.3 lbs, so they don’t have their growth stunted. It takes about 3-5 months to get a Guinea pig to process weight (between 1.3 – 2 lbs), yielding around 50% meat 0.7-1 lb. They also have a lot of weird, small bones, and most of the meat is in the head, so if that weirds you out, it definitely is not for you. 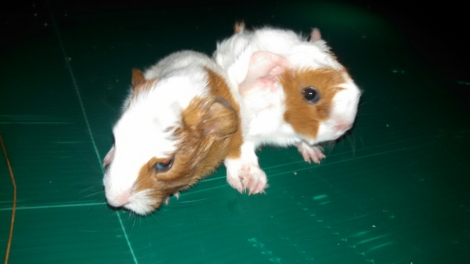 Guinea pigs are herd animals. They can often be seen nursing the babies of other pigs. One of my girls, POW, hasn’t successfully become pregnant yet, but I keep her around because she “babysits” and keeps the babies warm while the mothers are out running around and feeding. I keep them in cages in the yard for protection from predators and my dogs, and to keep them away from toxic plants.  They create a home zone, and don’t stray much from it (like chickens and their coops). They also don’t dig or burrow into the ground (they love it into hay and blankets thought). They only require 1 square foot of space as adults (and really prefer being bunched together while not eating). My juvenile pigs in the growout pen (I have 19 of them) are in a 16 square foot space, and they really prefer being in a 2 square foot space. 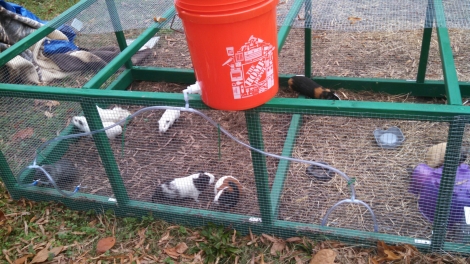 Rabbits are a whole ‘nother kettle of fish. They are like puppies if you put them in the yard. They can’t be put into tractors unless tractors have bottoms, because they are diggers! They CAN live in colonies, if they are carefully prepared. If rabbits aren’t raised together, they can become VERY territorial. I once knew of someone who wanted a free range rabbit colony, and the does dug one warren, and the alpha doe killed all the other babies but hers. This is very true if they have ever been kept in cages, so the groups of does need to start together. It is also hard to keep track of offspring this way. I know people who do it, but I am not nearly that ambitious, nor do I have the space on a half acre to do it. Rabbits will fight to the death, and does will castrate bucks sometimes. Most of the time, guinea pigs just talk macho, though, boars homed together have been known to fight, maim, or even kill each other because of hierarchy fights. Buck rabbits almost always will. 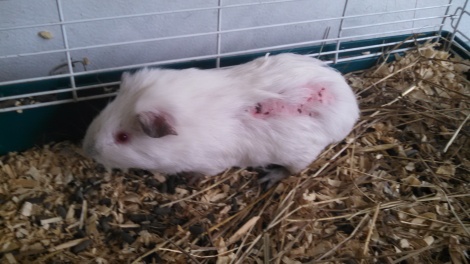 He was attacked by his own brother because a female in the cage next door was in heat.

Each rabbit gets around 6.25 square feet of cage space, requiring their own feeders, their own waterers, and cage rests. This means that the start up expenses of raising rabbits is much higher than guinea pigs, as you can keep 3 rabbits in the same space as 18 guinea pigs. Both species are WAY more sensitive to the sun and warm weather over 85 degrees than they are to the cold. This is because they can only cool using circulation through their ears. Guinea pigs suffer more than rabbits, because they also have an amazingly thick layer of subcutaneous fat. Here in North Carolina, winters rarely cause issues for either species, so long as they are protected from drafts, but summers sterilize rabbit bucks, and can be fatal without breezes and cooling water bottles. 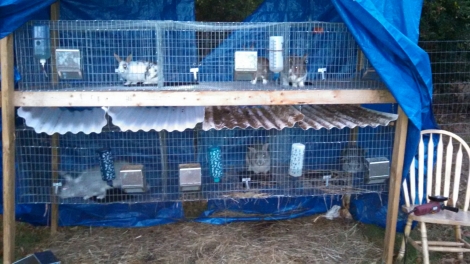 Rabbit cages also have to be cleaned out MUCH more, because their urine has ammonia in it, and can cause their respiratory tracts to dissolve (another reason cages are great). I have been using the guinea pig waste as mulch to keep them warm. Guinea pigs can get foot problems if bedding isn’t cleaned, but I make sure there is plenty of fresh materials on top. Guinea pigs can’t jump high or really climb, so sides of 8″ can be enough. My cages are 24″, because that is what the hardware cloth is, and cutting that stuff is a pain. I don’t need to have a lid on, but it is nice for protection from predators. Rabbits jump, and need cage tops that are well fastend with j-clips or hammers.

Both species poop out brown gold that can be sold for compost right away, without aging at all.

Guinea pigs can’t make their own vitamin C. So as long as you throw in some kale or carrots for them once or twice a week, they are golden. I find that they can free range themselves like crazy. I DO give them free range to pellets, as my pigs are pregnant and need trace minerals and access to proteins. However, when provided access to a new grassy area in their tractors, and ample hay (much cheaper per pound), they don’t really each much of the pellets (probably 1/8 c a day or less, unless they are heavily pregnant). I also don’t have to worry about obesity, as these guys run around all day, and self regulate what they eat really well. I also supplement with the spent grains from the brewing processes, which further depresses feeding costs, as this is considered a waste product. 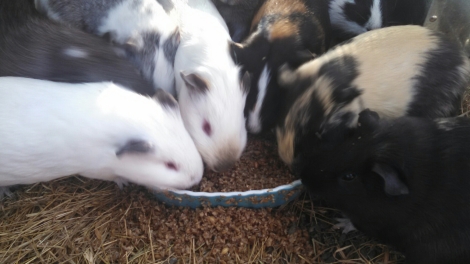 Rabbits can be fed a natural diet, but it is a lot more work to cut greens for them because they can’t be grazed well. I know Joel Salatin does it, but I don’t have that kind of capital or tractor space to set it up. It also requires getting genetics to optimize meat production on pasture raised systems (guinea pigs do too, but less so). They also have the world’s most sensitive stomachs! Sometimes I swear they can look at food and give themselves diarrhea and die. I haven’t had issues with this, as I make sure that all of my rabbits get ample amounts of grassy hay. This drops their pellet consumption to around 1/4 cup for an 8 lb rabbit over 6 months, and free fed until that age. But, rabbits are super prone to obesity compared to guinea pigs (less exercise), and refuse to reproduce if they are overweight at all.

In both species, faster growth rates can be obtained if they are fed solely pellets, but that also increases the cost substantially.

Both animals are prey animals, so don’t like being picked up, startled, or handled in any way. Guinea pigs crack me up. They hear a grocery bag rustling, and they are wheeking their little brains out. Most of the time, they are pretty quiet though. They do this thing called popcorning, where they just jump into the air and kick their little feet out in sheer joy! I have videos of that on my business facebook page, Wheeker Acres. I also have videos of the guinea pig setups. Some pigs are more shy by nature, and others are super outgoing. I often sit, watching and listening to them. Most of them lose interest when they realize you don’t have food (but so does my dog…). They are also easy to handle, I have never been scratched or bitten, and they sometimes crawl into my lap.

Rabbits are intellegent creatures, and super quiet. Other than an occasional cage rustle from them running laps, I don’t hear anything from them. If you have neighbors close, and you can take care of waste, they are ideal.  Some of my rabbits are social, and come up when they see me for a quick pet while I put food in, and others avoid me at all costs. They scratch like crazy if not careful, like a cat. But I have never been bitten. I did get charged by Spytfyre before she died though. 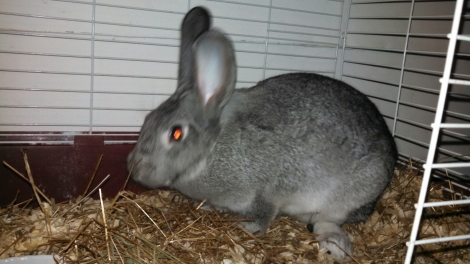 This is all for this post, as it is long enough… probably my longest one on this blog ever! Obviously, it appears that I like the taste of rabbits better, which is why I keep them.  But I love the ease and personality of keeping guinea pigs more. For the next post, I will look at the actual numbers in capital, food expenses, and meat productivity levels, just so I can see how the costs balances out.

2 responses to “Rabbits vs Guinea Pigs for Meat: Costs and Considerations Part 1”