So, last week after getting a female guinea pig at our livestock auction, I did some research and decided that they would be an amazing animal to free range, as they require very little food. So, in the last week, I went around trying to find some guinea pigs for my free range program.

Guinea pigs hate heat and humidity, so hopefully they do ok in the South East.

Lucky for me, I found a total of five free guinea pigs, one male and four females (from craigslist, and petsmart). I also got a male for $20, with a cage, and all accessories. So, here is the visual introduction of my new guinea pig herd.

Butters: The girl who started it all! She is 1.88 lbs, and is super friendly to me and my pets.

Charcoal: Named for her mostly black appearance, with the white hairs sticking up around her leg mark (the edges), I got her for free from Petsmart. She originally had conjunctivitis, and wasn’t sale worthy. But, the price was right, and I brought her home. I haven’t seen any indications since she left of the blocked tear duct.

This is the free addition from Petsmart, a 1.76 lb female.

Cream Puff: Named for her amazing gray color with white dutch markings, I got her (and her two sisters) from people who were moving for free. She is the most skittish of the girls, and weighs in at 1.78 lbs.

This is the 1.78 lb female I got from Craigslist

Cookie: Another sister from craigslist. She has a cool checkerboard pattern of brown and black. Her and Butters are both VERY social, and will run up to the side of the cage for food. This would explain why she is nearly 2 lbs (1.99)

This is Cookie, a 1.99 lb tortoise shell with dutch markings

Brownie: She is, BY FAR, my favorite colored guinea pig. A bit of roan, with tan splotches. She is not super friendly, but I love to watch her. She is 1.91 lbs.

Brownie is my 1.91 lb girl from craigslist. Also, the prettiest.

Silkie: Pure black, and shiny as can be. He was the $20 male that I paid for. He weighs 2.48 lbs, and will make a fine stud when his time comes. Right now, he has to be separated from the herd (only one male), so he gets to hang out in my lap as I blog and research. I might get a third male, to keep the non-breeding males content. 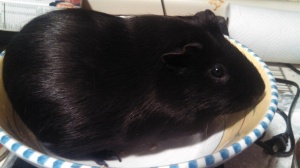 Steve-O: Somebody surrendered this guy to the local Petsmart because her son was terrified of it, and she was going to let it free. Half his body is silver, like Creme puff, and the other half is almost totally white. I chose to put him in with the girls because of his amazing colors. He is 2.44 lbs. He is a very pushy jerk in the group, and doesn’t like being handled much, but that is ok.

Almost everyone is in temporary housing, as I am working on the outdoor free range “tractor” like cage for the guinea pigs to live in. I have a lovely, secure area under some shade trees that will give them all of the greens they could ever want, and have planted other supplemental greens in my containers.