Lately, all of my dog work has been agility with Clark (who is making some amazing progress), several hours of training blocks once or twice a week.

But, we have another dog. A poor, neglected Cattle Dog named Banjo. He has been training in nosework (a sport for dogs that mimics search and rescue).  However, the last two to three weeks, he has been on break (weather, the ending of the last training session).  This poor, forlorn dog has been playing with his chuck it toy (a birthday present), all by himself, smacking his head with his ball.

Yep, look at me! I am such a neglected crazy dog. So much so that I have to play with the ball myself!

So, I decided to take both dogs to a herding workshop at Possum Hollow Farm. One day, for the entire workshop was $30 for the first dog, and $10 for additional dogs. Possum Hollow is in Rutherfordton, NC, which is about 3.5 hours away from Raleigh. I was super excited to be heading out, and left Friday around 6:30 PM (didn’t want to deal with the weekend rush).

Everything was going smoothly until Hickory, a little over 2.25 hours down the road. It was dark, and something falls off a truck! The person in front of me runs it over, popping both of her left tires! I hit it with my front left.  So, I pull over, open my trunk, and get out my tire changing equipment, and it is 38 degrees.

I have had a ton of experience changing tires on my car (had two flats in one day last year), and during a Kansas Ice Storm.  So, I get four of the bolts loosened by the time the cop shows up (apparently, two guys were killed there a few weeks ago).  Then, I moved to the fifth bolt.  AND I COULDN’T GET IT OFF! I was jumping up and down on the wrench, trying to get the bolt loose! So, the cop comes in (strong young man), and HE can’t get it to move!  Then we tried it together, NOTHING (this is probably over 450 lbs of pressure)!

So, he calls me a tow truck, and tells me to get the tire out of the trunk. The dogs are seat belted into the back seat, so I left the passenger side door open so I could get the stuff out of my trunk to get out the tire.  I look up, and a little spotted dog is RUNNING UP INTERSTATE 40 toward the police officer’s car!!!!

My heart drops into my chest (forsee flashes of  one of my best friends getting hit by semi’s or squished by cars). I call out his name, and he comes RIGHT BACK into my arms! I was shaking and practically started to cry I was so happy.  I get him loaded back into the car.

Then, more bad news,  the tow trucks in the area don’t have any air guns to get the bolt out (which could be stripped, or just in too tight!  So, I need a tow for a skill that I know how to do (It is now 10:45 at night).  So, I load everything back into my car and wait.

We get the car back to the shop, and get it up on the jack. And, the air gun doesn’t get the bolt out (panic yet?). Neither does their larger wrench (and, stuck forever?). Finally, they attached a six foot long fulcrum onto the end of the base of the wrench, and the two of them were pushing it down. I here a large POP, and out comes the bolt (at 11:45)! 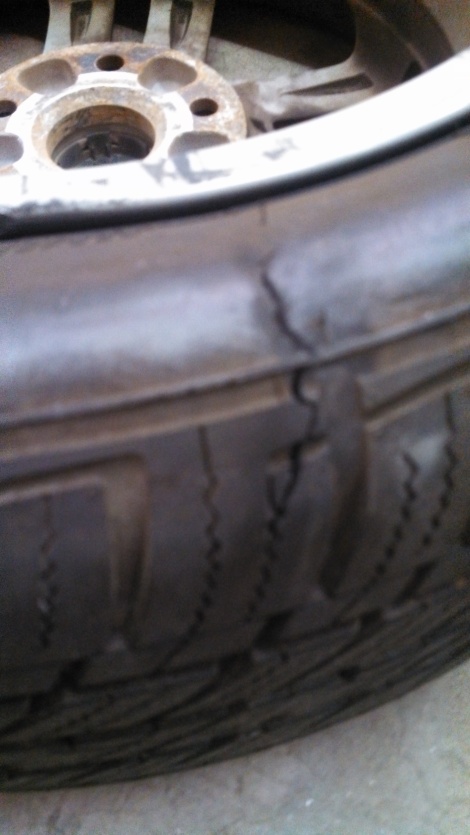 Yes, there is a six inch gash in my tire!

I knew it would be a dead tire… (turns out it was a six inch gash, four on the base, and two on the sidewall.) But $150 later (you better believe I am complaining to my tire shop for screwing in that bolt too tight), I was on my way again.

Got to the hotel a little after 1:30 AM, and lucky for me, it was a quiet, somewhat sketchy hotel. Of course, spending 2 hours in 38 degree weather, I had a hard time sleeping, because I was chilled. But I had Clark on the left, and Banjo on the right, and they were keeping me warm. (Even though Banjo had to sniff out every car in the parking lot!)

So,  a little before 9 AM, I arrive in the foothills of the mountains, not knowing what to expect, and immediately fall in love with Possum Hollow, the other seminar students (turned out to be around 20),  and  the area in general! Clark has been on sheep in the past, working them in large pens, left and right, and moving them around.  I didn’t actually know what to expect with Banjo.

And Banjo was AMAZING!!!! He could stop on a dime and hold the sheep in position, respond to their movement, AND hold. In the morning, we introduced him to sheep in a round pen.

I can get around these sheep and make them change directions! I swear!

After a few turns, he was moving around like a pro! The trainers there said he was one of the best first time dogs they had seen recently. I also got a lot of advice from people who know and have lived with Cattle Dogs, and our relationship really improved. 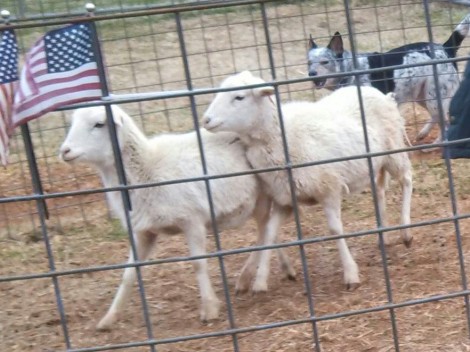 Yea, my name is Banjo, and I ROCK!

In the afternoon, we actually had Banjo on the leash, and put him in with the sheep (to teach self control).  We learned the skills of Come Bye (clockwise), Away (counterclockwise), Stand, Steady (don’t rush the sheep), Walk Up (approach the sheep), and That’ll Do (back away).  We also learned about his bubble, where if he got any closer to the sheep, he would lunge. I can’t believe he had that much control!

Clark, however, refused to acknowledge the sheep existed with the trainer in the ring. I spent so much time on agility, that he kept looking for tunnels and jumps, and looking to me for instruction. Once the other trainer left the area, Clark seemed to respond to the sheep better. He was chasing after them around the outside of the pen for a little bit, but kept getting distracted by the poop (Silly Labs!). Sadly, I think I agility trained  the herding out of Clark, and it will be a lot of work to handle him, as he lacks confidence. We will still go out and play, as he was working well at the end of they day, but it will be for fun.

By the end of the day, I totally  fell in love (even more) with Australian Cattle dogs, their work ethic, and personalities. So, I think I am going to get one… any thoughts?

Why yes, it is appropriate to sneak under the blanket and snuggle when I am sleepy!

I mean, how can you not like waking up to this face?

One response to “The Odyssey for Sheep”