So, I have had back to back weekends with Agility Trials, so I haven’t gotten to update as planned.

Every year at camp, the state health inspector comes. My boss was quite paranoid that having rabbits near the program building would constitute a “stable”. So, we compromised and moved them up to the stables.  However, they were all around 5 lbs, and I was worried that they would start clawing at the clumsy children. So, on 7/3/13, I took home Chubbs and Sugar. They had a marvelous last day at camp, being cuddled, fed special treats, and enjoying all of the hand picked clover and grass that the girls could give them.

This was Chubbs last day on Camp.

The other three rabbits came home with me yesterday (7/7). But don’t worry, a return trip to Wicked Chicken replaced them with 9 new rabbits, which I will detail in another post. 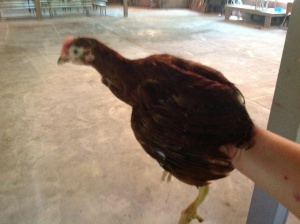 The chickens love their new home. However, they are becoming a bit more aggressive, even though there is plenty of space for them. Some of the large ones are close to 4 lbs!

Over the weekend, tragedy struck. Somebody who wasn’t supposed to move their chicken tractor, tried to do so with the chickens outside. They dropped the tractor on one of the chickens, and managed to break the leg of two others (including the one shown above). I left the two chickens with broken legs, as they were eating, roosting, drinking, and pecking. I don’t know if chickens feel pain, but I am hoping that some of the leg functions return to these chicks. They aren’t being picked on or at, and don’t seem to act as though they are in pain. If things don’t improve by Wednesday; however, I will bring them home for the dog. 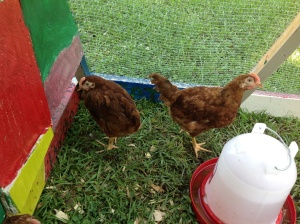 All of these creatures continue to be popular with the girls… I put a hiding branch in with the button quail last week, and lo and behold, two tiny brown eggs appeared! I took a photo, but the camp Ipad didn’t actually SEND the email I composed. Hope to post that pic later…