This is not a post for those with overly sensitive stomachs, or those who are offended by the idea that rabbits are pets and not food.

Well, the rabbits are slaughtering size.  I have never killed a rabbit before, and knew it would be a really difficult prospect. Since these were Rex rabbits, they have a magnificent and fuzzy fur coat which I want to clean and tan later. They are beautiful and snow white coats, which I hope to make into mittens or a blanket. 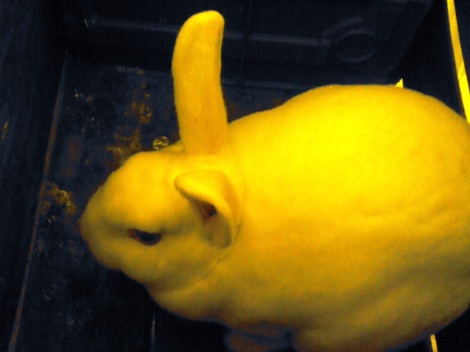 This is the 7.25 pound rabbit that will be killed after the 5.4 lb rabbit

I used a broomstick to snap its neck. It was much quicker than the chickens. I cut a hole between the two bones in the leg so I could hang the rabbit to bleed it out and skin it. I had nothing to hang it, so I bent and used a coat hanger (SO not ideal, but it worked).  Then, I cut off the rabbits head and front legs.

This is the decapitated rabbit hanging from my tub.

I then gently cut rings around the lower legs and started to peel the skin away. Lines were cut down the back legs to the anus. The tail and anus were cut out. Once I had these cuts, the skin became super easy to peel right off of the rabbit. I let it cool down a bit, and put the skin the freezer to flesh and process in the future (once my knife gets in).

This is the skinned rabbit hanging up.

I gently cut open the rabbits stomach and removed the bladder (as it was full, and I didn’t want it to spill). The internal organs came out easy, except the lungs and kidneys. I cut through the rib cage to take them out. After the rabbit was skinned, I removed all of the meat (leg and loin, mostly) and cut it into bite sized chunks to prepare for my version of Hasenpfeffer (German Rabbit Stew). From the 7.25 lb carcass, I got 2 lbs of stew meat.