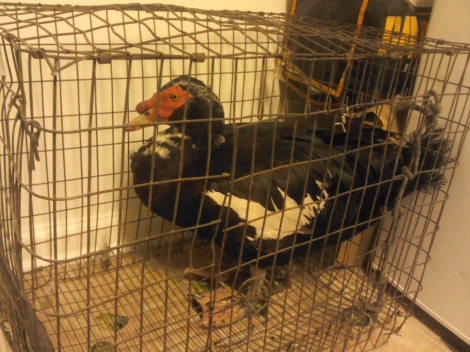 My dog loves to chase these ugly ducks around the apartment complexes at Lake Lynn (some idiot released theirs). So, I decided to give him a taste of the uglies. Now, Muscovies are not related to other ducks, as they hiss like geese, and prefer roosting in trees. They also have meat that has a lean consistency of rabbit or beef. So, I wanted some for me, and was going to give the leftover carcasses to Clark.

I was really frustrated with the instruction that I got online for how to kill them.  I didn’t know the best methods to kill them, or how to pluck them, or anything.  I used an old pair of jeans, cut off a leg, and stuck him in it to keep him still.  So, I sharpened the ax, put him on the chopping block, and decapitated him.

I then cut off the wings and feet. I wanted to pluck it, but apparently, Muscovies are near impossible to pluck. So, I opted to skin it.  I started at the neck with a sharpened knife and peeled the skin off. Once it started, it came off fairly easy. So much for saving the feathers for crafting activities!

Once it was skinned, I cut into the cavity and removed the internal organs. Bagging up the head, viscera, and other organs for the dog. Once everything was cleaned and gutted, the carcass weighed over 7 lbs!!!

I then grabbed my knife and dressed off the breasts. Each of the breasts were over 1 pound each!

Since Muscovy is very lean, and removing the skin got rid of any fat that they would have.

Naturally, I fixed this with the world’s best food. BACON!

Preheated the oven to 375

I then wrapped the duck breast in bacon. I turned a frying pan on high with a bit of olive oil for three minutes crisping the bacon on the bottom.

Then, I put the breast (cooked bacon side down) in a glass pan and slid them into the oven.

I baked the duck for 10-15 minutes (until the bacon on the top turned crispy).

While the duck was baking, I sauteed mushrooms and onions together, melting a bit of blue cheese into it for a side dish. It was pretty amazing.

Clark, however, hated the slight musky odor of the duck. I tried giving him the large framed carcass, and he wouldn’t eat it at all. I managed to cut off some of the back leg, and got him to eat it the first day, but he refused to eat any more. I did clean another pound and a half off the carcass, fried it, and he ate it then. So, no more muscovy for the dog. Though, I may do it again for me!