I left Apartment Acres in the hands of a capable friend (including Clark, the amazing dog) so I could go to the Soil Science Society for America headquarters and do some major overhauling to soils4teacher.org (check it out, we now have pictures). Headquarters also happens to be in Madison, WI, which is just a stones throw from where I grew up.

Apparently, at night, the little jerks will peck each other to death!  The first two casulaties were Monday night. Poor babies! And then two more died this past Friday.

Sadly, they are located in a 7.5 square foot space, and according to Virginia Tech extension, they should have 1/2 square foot per bird. At the beginning of the week, 18 would require 9. So, they thinned themselves out accordingly I guess. I know my space is small, but they plans that I had for the 10 ft brooder box didn’t get a chance to materialize before I left for WI.

However, once it is built, it can hold 13 chickens until 5 weeks of age (which is two weeks from now), and 10 up to 8 weeks. But, by that time, we should have moved them to their new home at camp!

This is also exacerbated by the fact that we don’t have a red lamp, which apparently reduces the urge to peck to death… evil chicks!

I haven’t got weights on any of the animals, but it looks as though they are growing well… Tail-feathers are popping in on all birds.

I added a second watering device, and elevated it onto blocks, because they kept kicking sawdust into it. 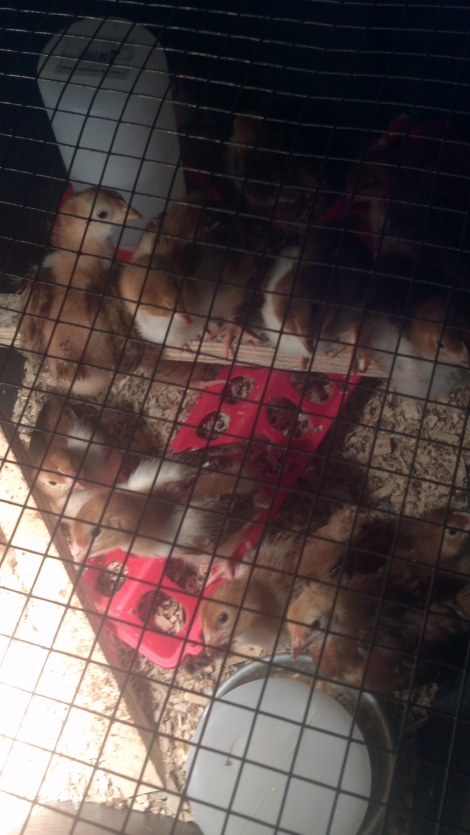 And the birds are growing faster and faster…